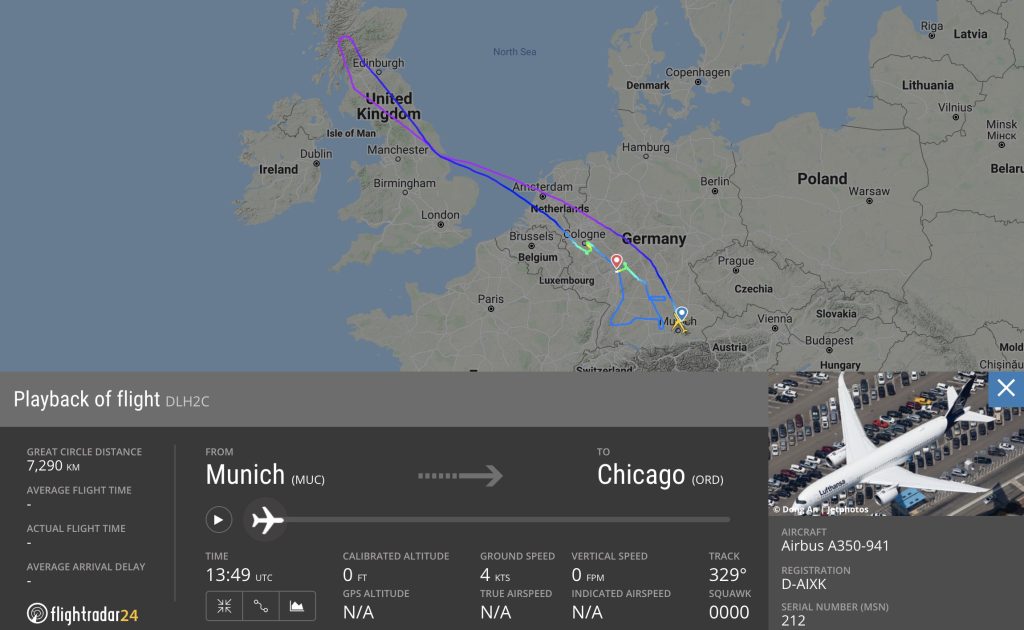 Why did this Lufthansa A350 turn around over Scotland?

On September 15, 2021, a Lufthansa Airbus A350 registered on flight D-AIXK, on ​​flight LH434 from Munich (MUC) to Chicago (ORD), turned around over Scotland and then returned to Germany. On the return, it made a low pass in Cologne, then flew south to Munich where it continued to hold before finally landing in Frankfurt. With the details of Lufthansa, we explain what happened and how Lufthansa made the decisions they took to ensure the safety of everyone on board.

Flight LH434 departed Munich for Chicago at 14:04 UTC, climbing to a cruising altitude of 38,000 feet. Shortly after the plane left Munich, the airport operations team discovered bits of rubber on the runway. After analysis, the airport and Lufthansa determined that the tire pieces belonged to LH434. Lufthansa’s technical operations relayed this information to the crew, and the plane turned around and returned to Germany. As we have already written, flights that encounter a technical problem often return to one of the airline’s home airports. In this case, the airline also did not want the plane to cross the ocean with a possible landing gear problem, which is why the decision was made to return to Germany.

Back in Munich, the airline requested a visual inspection of the aircraft’s landing gear at Cologne / Bonn Airport (CGN) by the air traffic control tower. The aircraft made a low approach at 675 AMSL so that the tower could visually confirm that the gear was extended and that no other part of the aircraft beside the tire was damaged. Once the tower was completed its inspection, the crew decided to return to Munich.

Each aircraft has a maximum landing mass, which is the total safe mass at which the aircraft can land without requiring an airframe inspection for damage. In abnormal situations like this with a tire problem, the crew also want the plane to be as light as possible to ensure a safe arrival. A lighter plane is easier to stop, which is especially important in cases where the tires can be damaged. In the case of LH434, the crew traveled to an area near Munich and entered a holding pattern to continue reducing the weight of the fuel.

The diversion to Frankfurt

While holding and preparing for a landing in Munich, bad weather became a factor. The crew also took into account that Munich airport operated with only one runway and therefore decided that diverting to Frankfurt would be the best solution. The flight landed safely in Frankfurt at 20:20 UTC, 6 hours and 16 minutes after leaving Munich.

The passengers were accommodated in hotels in Frankfurt overnight and will continue their journey to the United States today. The A350 remains in Frankfurt where a new tire will be fitted and the aircraft returned to service after inspection.