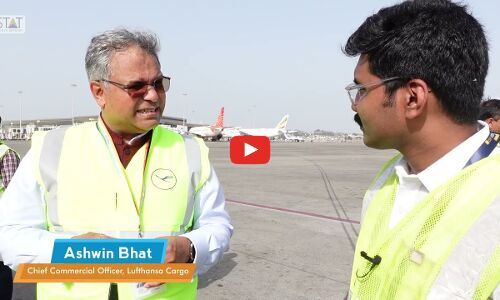 Last Tuesday (31 May 2022), Lufthansa Cargo announced the first landing of its Boeing 777 freighter named ‘Namaste India’ at Chhatrapati Shivaji Maharaj International Airport (CSMIA) in Mumbai, which was operating from Frankfurt as part of its four times weekly service to Mumbai.

The name builds on the carrier’s established pattern of naming its cargo planes after major markets. The airline calls this guiding principle “say hello to the world”.

Namaste India is intended to represent the link between Lufthansa Cargo and the country. The airline has been serving Indian air cargo since 1959.

Asked about the nature of the demand the airline operates from Mumbai, Bhat pointed to Lufthansa Cargo’s focus on handling special cargo. “For our cargo service to Mumbai, we are looking for machinery, automobiles and pharmaceuticals and wherever we can add value.”

The plane has already flown to various airports in India since, although this is the first time it has come to Mumbai. The naming ceremony was delayed by the Covid-19 pandemic.

Speaking about the capacity increase to Mumbai, he said: “Lufthansa Cargo has not only increased capacity to Mumbai, but also to other airports in the country, including twice to Bangalore and Chennai. But the most important is the increase in cargo capacity to India on passenger aircraft bellies. Compared to a month ago, we have gone from ten passenger flights to 32, (since India reopened its space aerial for commercial operations.)”

Meanwhile, Manoj Singh noted the redeployment of pre-Covid-19 capacity as a positive sign for the airport. “CSMIA Mumbai International Airport is committed to providing the best services and infrastructure to Lufthansa Cargo’s cargo operations at our airport,” he said.

Highlighting the importance of pharmaceuticals to Mumbai and Lufthansa Cargo, Singh expressed his delight at how the European airline has evolved to handle such complex cargo from Mumbai.

Lufthansa Cargo is expected to get three more 777 freighters in the coming years. The carrier also placed an order for seven Boeing 777-8 freighters that will join the fleet after 2027.