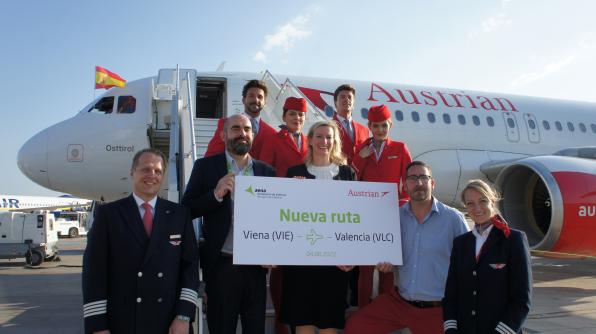 Yesterday afternoon, Saturday, Valencia airport opened a new connection to Vienna by Austrian Airlines, an airline belonging to the Lufthansa group, which will operate this connection twice a week, on Tuesdays and Saturdays.

The flight was welcomed by Julia Hillenbrand, Lufthansa Group Managing Director for Western Europe, and Airport Operations Manager Oscar Soriano, who were joined by members of the Visit Valencia Foundation who presented passengers with a gift of welcome.

Austrian Airlines offers between 160 and 198 seats, depending on the aircraft model, for this new direct flight and seeks to offer a differentiating service for the Valencian passenger through its Business Class but also its Economy Class offer which includes a new gastronomic concept , “Austrian Melangerie”, which allows you to taste traditional and regional Austrian cuisine before landing.

The director of Valencia airport, Joaquín Rodríguez, underlined: “This new route significantly expands the travel possibilities for users, since, in addition to the direct flight to Vienna, the airline offers comfortable connections with European and intercontinental destinations, such as, for example, Athens, Bangkok, Bucharest, Copenhagen , Yerevan, Stockholm, Prague or Warsaw, via its hub at Austrian airport.”

According to Julia Hillenbrand, Lufthansa Group Managing Director for Western Europe:With the arrival of Austrian Airlines, the Lufthansa Group is consolidating its commitment to this region, where for the first time all the companies of the group will operate this summer with a total of 140 weekly flights from/to Valencia, which represents an increase 6% compared to summer 2019. We are very pleased with the good reception Valencians have received each time we have introduced a new route, offering them a multitude of connections with destinations around the world through our hubs in Frankfurt, Munich, Zurich, Geneva, Brussels and now Vienna.”