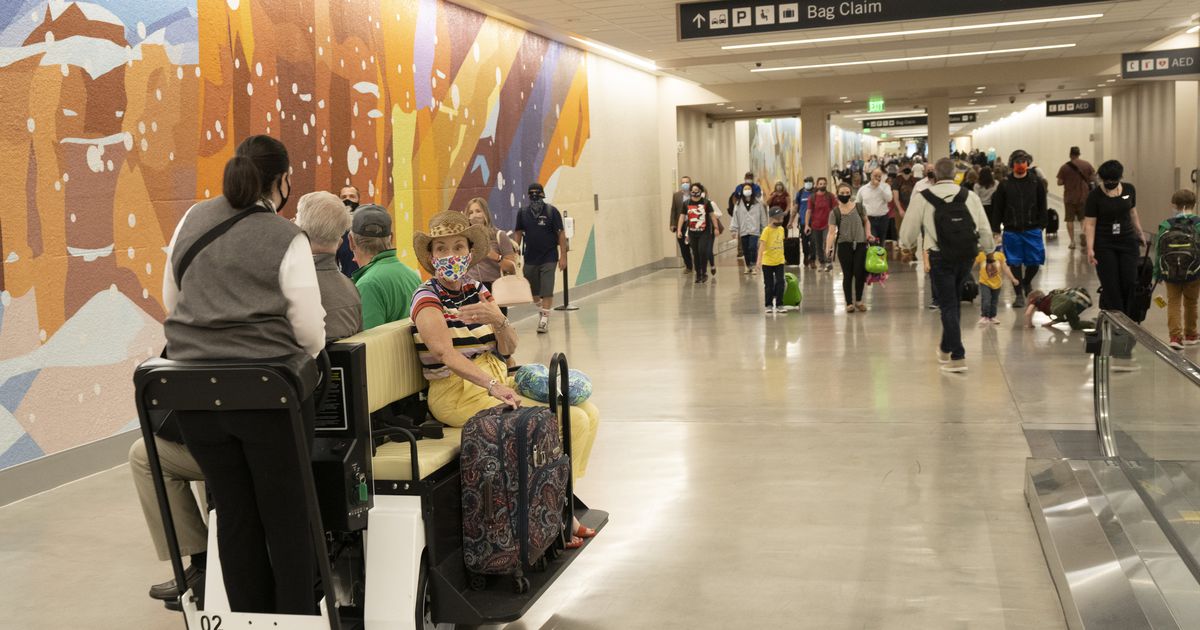 As mask mandates expire, officials predict Salt Lake International Airport will be busier than ever.

“Salt Lake City and Utah are economically hot,” Wyatt said, “so there’s a lot of incentive for airlines, you know, to roll out new services.”

In the first two months of the new year, the airport made significant progress, including the debut of Spirit Airlines in Utah, more direct flights to Europe and the return of Air Canada.

The main reason for the new flights, Wyatt notes, is that the airport can finally accommodate a high volume of passengers. Prior to the expansion, Wyatt says the airport struggled to keep up with demand and lack of space limited the number of flights and airlines able to land in Utah.

Now, with a bigger airport and more services, projections call for 28 million people to pass through SLC International by next year, a state record.

“I expect we will have much higher volume than the forecast suggests,” Wyatt said, noting that 27 million people traveled through the older, much smaller airport.

The airport is adding more nonstop flights and two new airlines to the list.

Currently, about 105 direct domestic flights land in Salt Lake City each day, Wyatt says, a big jump from the roughly 40 direct flights before the airport’s expansion.

“These nonstop flights are extremely important to the tourism industry because businesses want to be able to travel easily to as many places as possible,” Wyatt said. “So it’s really exciting to see this trend grow where we’re actually getting new services and in some cases really competitive services.”

Spirit Airlines, a Florida-based airline known for its cheap tickets, said it will take off from the Salt Lake airport tarmac for the first time in late May. The airline intends to offer flights to Orlando, Las Vegas and Los Angeles.

Delta Airlines is also bringing back nonstop flights to Amsterdam, London and Paris once summer arrives.

(Rick Egan | The Salt Lake Tribune) Delta planes and construction of the next phase can be seen through the windows of the main terminal, at Salt Lake International Airport, Thursday, June 3, 2021.

With the new additions and the return of postponed services, “Utahns will have more access to Europe than ever before,” airport spokeswoman Nancy Volmer said.

There are still some renovations to complete before the new airport is finished. For now, Wyatt says the project is halfway done. Construction crews still need to add four more doors to Concourse A, which should be done next spring.

By October 2024, Wyatt says a tunnel between Concourse A and Concourse B will be open to travelers and will make commuting “just a whole lot easier.”

As mask mandates expire around the world, Wyatt speculates that the spring and summer seasons will be “incredibly busy” for the airport.

“I think with the removal of the mask mandate, it’s going to be symbolically just a huge signal for people to get out of their basement and go somewhere,” Wyatt said.

How long all the renovations will take to complete is still up in the air. With the current volume of travelers, Wyatt believes some modifications will be required to keep up with traffic. Volmer confirms that the airport could enter phase four of the project, which would add an additional 16 gates to Concourse B.

How we won: The activists who stopped TUI deportation flights