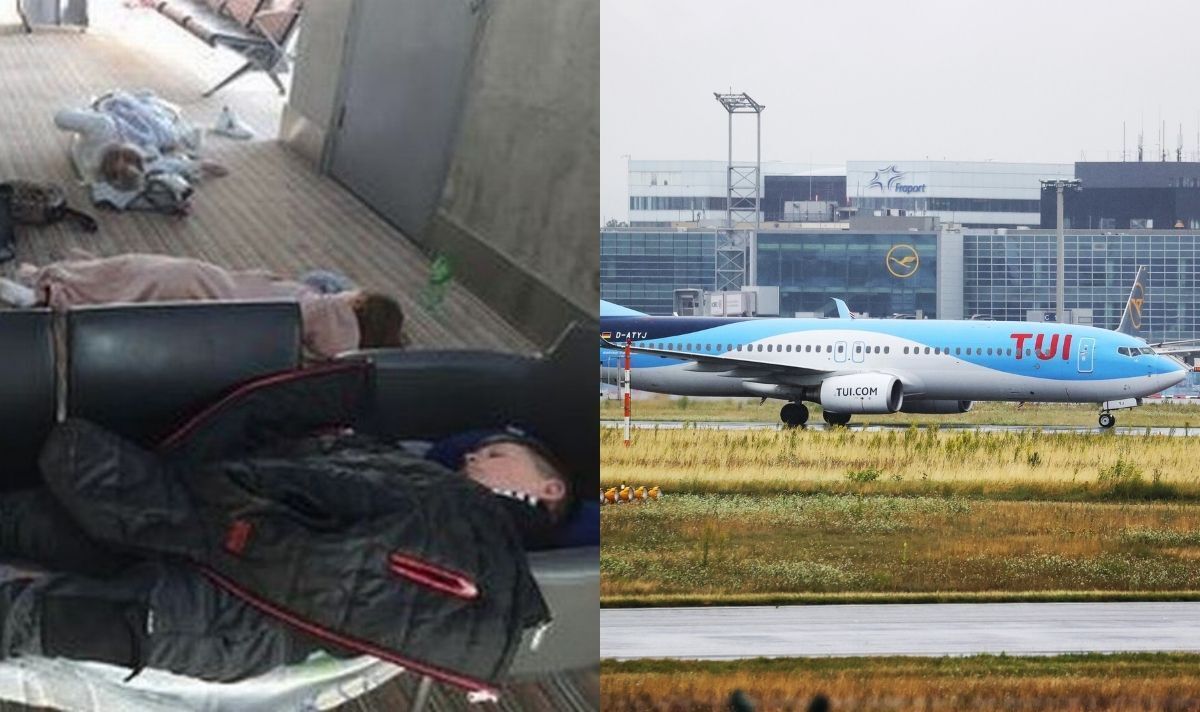 Lisa Mason and her four children, Holly, 21, Poppy, 16, Daisy, 11 and James, nine, were on holiday in Cyprus and due to fly back to Manchester when the heist began. When the family arrived at Larnaca airport, TUI staff told them the flight had been delayed and ended up boarding an hour late. Passengers then waited on the grounded plane for three hours before being told to return to the airport and left in the departure lounge, with many unaware of what was happening.

Ms Mason, from Staffordshire, called the situation a “mess” and said it was causing major “distress” to her children who were enjoying their first holiday since the pandemic began.

She said: ‘We got on the plane at 1.30am to leave at 2.30am but sat there for three hours. Everyone was asking what was going on. We were told that there were technical problems. My daughter doesn’t like to fly and she was distressed by it all. Other people were really upset.

“It was hot there. People were asking for water but they were saying they were out of stock and they had no bottled water. All they could offer was wine, tonic water and ginger beer. They had nothing to eat except crisps. People were getting angry and so were TUI staff. They said they didn’t have enough staff.

Lisa Mason originally booked the holiday at TUI in Newcastle city center but said the problems started before the holiday had even started.

Ms Mason said passengers were then told via a tannoy announcement that everyone should disembark and return to the airport.

She said: “We were then told that we had to stay one more night and that they would find us accommodation. They were trying to find a place to accommodate 200 people.

“They then said that the hotels were full. People were calling the hotels they had stayed in and being told they could return, but TUI said if people made their own arrangements it would void their insurance.

“Then they told us they were flying another plane from Manchester to take us home. We were told different things – it was just ridiculous. Everyone was absolutely furious.

“We were left waiting for hours, people were lying on the ground trying to sleep. There were elderly people, a lady with a six month old baby, two people in wheelchairs.

“We were just given a lot of misleading information, nobody knew what was going on. We were basically just stuck.”

Ms Mason and her children ended up sleeping on the floor at the airport, before finally being allowed to board another plane which took off at 3.18pm local time, nearly 2 hours after the scheduled departure of the flight.

Lisa says the pilot told them the flight was delayed because there weren’t enough crew members.

The family’s return flight time was changed from 10:30 p.m. to 1:30 a.m. the next morning, and their outbound flight from Manchester was later delayed by two hours due to ‘baggage handling issues’.

Ms Mason said the family had a “lovely holiday” but the confusion had “completely tarnished” the family’s first holiday since the pandemic.

She added: “There were people all around and no one knew what was going on. A Jet2 flight to Glasgow had been canceled so some people were booked onto our flight. It caused an hour delay but it was okay, we understood that.

“My daughter doesn’t like to fly and she was upset about it. Other people were really upset.

DO NOT MISS :
Britons will need a Covid certificate for at least another six months [REPORT]
EasyJet horror: woman threatens flights [REACTION]
Airport ‘like the Hunger Games’ as Britons queue for hours at security [PICTURES]

She added: ‘We were told by the pilot that the crew who had been the night before had worked too long and needed 12 hours rest between flights,’ Lisa said. “He said we shouldn’t even have been allowed on the plane and he thought we were all put up in hotels that night.

“It was a complete shambles. We were supposed to go to Turkey two years ago but it was canceled due to Covid and it was our first family holiday in a long time. It completely and utterly tarnished the holiday. “

TUI apologized to affected holidaymakers and said passengers had been issued vouchers to buy food and drink at the airport and its customer teams would be in contact with them about compensation.

A spokesperson said: “We would like to apologize for the inconvenience caused to our customers on flight TOM2367 from Larnaca to Manchester which has been delayed due to operational issues.

“The safety and wellbeing of our passengers and crew is always our top priority, and we would like to thank passengers for their patience and understanding at this time.”