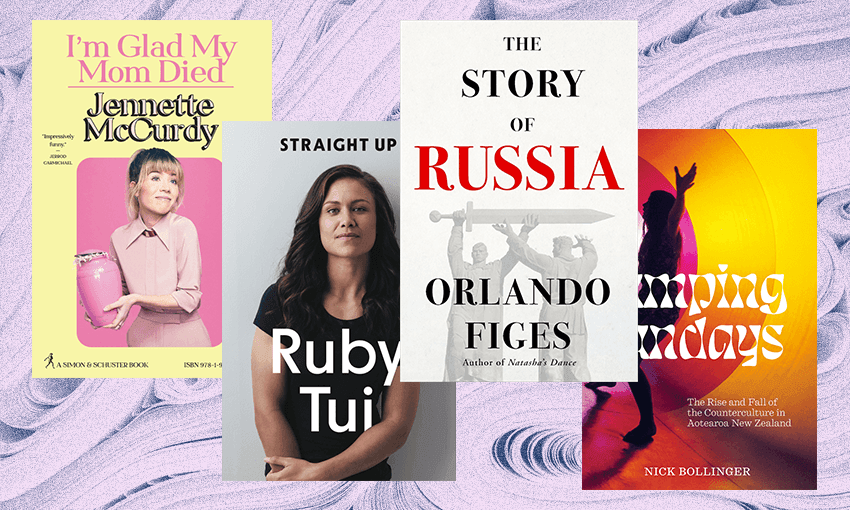 The only best-selling independent books chart published and available in New Zealand is the Top 10 list recorded each week at Unity Books stores in High St, Auckland and Willis St, Wellington.

What is a “jumping Sunday”, you ask? Kiran Dass recently wrote for the Guardian“Leaping Sundays were a series of weekly ‘happenings’ that took place in Auckland’s Albert Park in the late 1960s. In a kaleidoscope of guitars, bongos, ponchos, beads and kaftans swirling among puffs of incense sticks and marijuana, the hippies – contemptuously called freaks, freaks, radicals and dropouts – gathered to listen to live music and dance, listen to anti-war speech music and finding a sense of community in a shared rejection of New Zealand’s monochromatic conservative landscape at the time.

Listen, it’s a provocative title. But Jennette McCurdy’s memoir (focusing on her dysfunctional childhood stardom – she starred in Nickelodeon’s iCarly and Cat & Sam) has been hailed as “a layered tale of a woman who comes to terms with both love and violence” by the Atlantic, and “measured, harrowingly poignant, and often hilarious and funny” by Shondaland. Hook them into controversy, keep them sticking with some damn good storytelling.

We recently published a essay excerpt of this new BWB collection for your reading pleasure.

A good dose of Ishiguro, with robots, neurotic mothers, sick children, technology and the desire for perfection that turns sour… What more could you ask for in a dystopian novel?

Every week for the past two years, this gem has made it onto this bestseller list (every week, except maybe two).

If you’re ready to be inspired, Ruby Tui’s new memoir should do the trick. The editor writes: “After a childhood filled with neglect, Ruby longed for another path. Determined not to let her upbringing limit her, she survived abuse, drugs and tragedy to become one of the most successful rugby players in the world.

Shrines of Gaiety is set in 1920s London – the nightlife of Soho, gangsters, jazz and the dark reverberations of the Great War. Almost all critics compare Kate Atkinson to Dickens after that, so a mighty feat. An example from Slate: “A wondrously complex piece of narrative clockwork… London’s jazz age of sanctuaries of mirth is almost as unforgiving as Dickens’ Victorian metropolis and even more plagued with crime and intrigue … Irresistibly enjoyable.”

New novel from the author of Home Fire, which won the Women’s Prize for Fiction in 2018. Some seductive praise for Best of Friends:

“…an epic story that explores the bonds of childhood friendships, the possibility of escape, how the political world intrudes on the personal” – Observer

“A profound novel about friendship. I loved it in pieces” – Madeline Miller

Why are readers still gobbling up Greta & Valdin? Stacey from Goodreads says: “The author of the book looks like a GC. It’s a good book in my opinion, and I like that everyone is gay. I give it nine out of nine Matariki stars. Very well said.

2 The history of Russia by Orlando Figes (Bloomsbury, $35)

The New York Times neatly summarizes, “Orlando Figes provides valuable lessons on the importance of mythologizing the country’s past in his new in-depth study of Russian history. A British historian whose previous books include social and cultural histories of Russia, Figes aims in this introduction to explain how the central narratives used to justify current leadership have been shaped and exploited over the centuries.

3 Before the coffee gets cold by Toshikazu Kawaguchi (Picador, $20)

The book that will not leave us alone. It’s been two and a half years since Sam Brooks investigation and we still don’t know why.

4 The portrait of marriage by Maggie O’Farrell (Knopf, $38)

The new historical fiction from the author of Hamnet.

“It was an insomniac memory, not a dream. It was the piano lesson again – an orange tiled floor, a high window, a new upright in a bare room near the infirmary. He was eleven years old, trying out what others might know as Bach’s first prelude to the first book of the Well-Tempered Clavier, Simplified Version, but he didn’t know anything about it. He didn’t wonder if it was famous or obscure. There was no when or where. He couldn’t imagine anyone ever bothering to write it. The music was just there, a school thing, or dark, like a pine forest in winter, exclusive to him, his maze bereft of cold grief. It would never let him go.

There’s a new Ottolenghi on the shelves, which indicates one crucial thing: the Christmas season has officially begun.

This new offering focuses on delicious extras (harissa butter… tamarind dressing… mouth watering…) that you can use to boost multiple meals. The Telegraph says: ‘You could cook with this for years and never eat a boring meal.’

9 Babel or the necessity of violence: an obscure history of the Oxford translators’ revolution by RF Kuang (Voyager, $35)

New standalone fantasy novel from the author of The Poppy War Trilogy. Goodreads humans are split, so we’re giving one rep to each side of the aisle:

Sofia wrote: “At the end of Babel, I was shaking. Maybe out of grief, maybe out of fear; I felt like I had seen something monumental rise and fall. And, for a minute, the world seemed so still, as if the last pages were an excerpt from a silent movie. …I think at some point in the near future, the enormity of what I just read will hit me. But for now, I’m going to type and try, in vain, to express the shockwave that I know is about to hit the literary world.

Emily May wrote: ‘For me it was a lot like reading a textbook. Dry regurgitation from a linguistics or postcolonial course. The author uses Oxford as a setting and the last industrial revolution as a historical model, adding very little new to it all. The protagonist, Robin, is a very passive, age-old character surrounded by equally benign and forgettable characters, often serving as a mouthpiece for what looks like shocking modern views, or one-dimensional EVIL imperialist racists. Where is the unique fantasy flair? Why do all the characters lack nuance?

According to the publisher’s blurb: “Drawing on the results of the national research project Manawa ® ki te Reo Māori, which investigated the motivations and barriers to the acquisition and use of the Maori language, Te Huia encourages readers to explore how they can return to te reo Māori in everyday life…. At the heart of He Reo Tuku Iho is the knowledge that it is possible for Maori to bring te reo in minds, hearts and mouths.