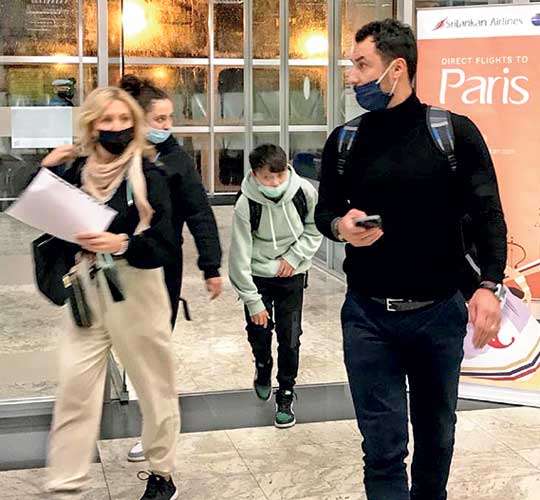 Several tourists from France arrived on Sunday following the resumption of direct services to Paris by SriLankan Airlines after a six-year hiatus. The national carrier will operate three times a week between Paris and Colombo. Here are some of the passengers who arrived on the Paris-Colombo flight

Tourist arrivals hit a historic post-COVID high of 22,771 in October, pushing the cumulative figure to over 60,000.

Arrivals in the first 10 months were 60,695 – a major development since the borders reopened on January 21, but down 96% from the corresponding period last year.

Following the lifting of the ban, the national airline SriLankan Airlines has also resumed passenger flights to India and expanded its innovative ‘buy one, get one free’ airline ticket offering. .

Ahead of the winter season and a one-year hiatus in physical engagement at global trade shows, Sri Lanka Tourism participated in a series of promotional activities at major tourism events in France and the UK. The first of the promotional campaigns was the International French Travel Mart (IFTM) Top Resa in Paris last month, followed by the World Travel Mart (WTM) in London, which kicked off yesterday.

According to Sri Lanka Tourism, fully vaccinated tourists can now stay in any type of accommodation without PCR testing on arrival and they can enjoy a “flexible bio-bubble” with all hotel facilities made available. while being allowed to visit approved tourist sites. They are also exempt from obtaining compulsory local COVID-19 insurance coverage, subject to comprehensive travel insurance that will cover health and other expenses related to COVID.

The resumption of SriLankan Airlines flights this weekend to Paris after a five-year gap was seen as an added bonus to revive the battered tourism industry.

In addition, the government recently approved five new airlines to operate in Sri Lanka, including Edelweiss, Aeroflot and Air France which will start this month, while Russian Air Azus and Italy’s Nyos Air will begin operations in December.

For the past 18 months, Sri Lanka had observed strict quarantine measures for travelers and a series of lockdowns to control the COVID-19 pandemic. These measures have been extremely hard on all players in the tourism industry, including nearly three million dependents due to the double crisis of the Easter Sunday attacks and COVID-19.

President Gotabaya Rajapaksa is of the opinion that the tourism industry should be gradually opened up with less restrictions for international travelers as well as an aggressive vaccination campaign, as it is a key sector for the economy in foreign currency.

“With the relaxation of travel restrictions, travelers from all over the world are increasingly interested in visiting the country,” Tourism Minister Prasanna Ranatunga said.

Sri Lanka has lost around $ 10 billion in foreign exchange earnings due to the pandemic since the start of last year.

Release in accordance with article 40, section 1 of the WpHG [the German Securities Trading Act] with the aim of distribution on a European scale

Eurowings expands in Prague with new summer destinations for 2022