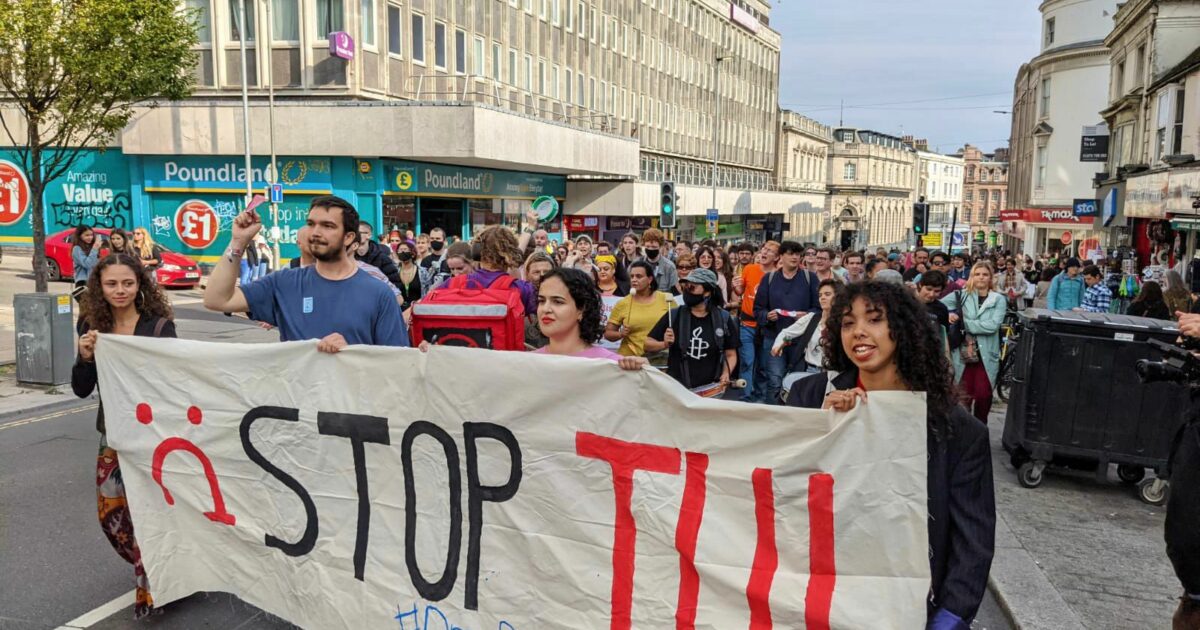 How we won: The activists who stopped TUI deportation flights

Activists trying to end TUI airline’s involvement in deportation charter flights announced their victory earlier this month. After just over a year of organizing by the StopTUI campaign, TUI has not organized a deportation flight for over six months.

For years, TUI has been one of the main airlines operating mass deportation charter flights on behalf of the Home Office. These thefts, which often took place in the dead of night, ripped hundreds of migrants from their lives in the UK, sending them back to countries where many were persecuted.

Activists suspected TUI stopped working with the Home Office in November 2021 when they noticed the airline had not run a deportation flight for three months. These observations were later corroborated by an anonymous source, who confirmed that the airline had severed ties with the government.

The implications of this victory are significant. While this won’t completely stop the evictions, activists believe it will make them more difficult to carry out and sets a powerful example of what is possible in resisting a hostile environment.

“Now, thanks to a successful campaign, at any time [the Home Office] decide to do a [deportation] the flight is coming, [they have] fall out,” says Steve Jackson, a StopTUI activist. “Over the last six months we’ve seen they’ve had to use seven different airlines, most of them non-UK based. […] it’s harder for them each time, which means they’re less likely to order an eviction flight.

For nearly a year, we have been campaigning against @TUlUKseeking to end their role as the Home Office’s main eviction partner.

Today, we are happy to announce the success of this campaign.

People power was the key.

The StopTUI campaign was launched in early 2021 by a coalition of groups, coordinated by SOAS Detainee Support (SDS), an abolitionist group that visits migrants detained by the government. Other groups involved were Black Activists Rising Against the Cuts (BARAC), Kurdistan Solidarity Network (KSN) and Lesbians and Gays Support the Migrants (LGSM).

Set up during the pandemic, StopTUI’s first action was a month-long online campaign in April 2021, which aimed to raise awareness of the evictions, TUI’s involvement in them, as well as its bad practices in general – such as its strong weaponry of the Greek government opened its borders, which led to the first wave of coronavirus in the country. The campaign called on people to make placards and share them on social media, engage in Twitter storms and phone blockades, and sign a open letter.

Have exploited an important online support, the activists decided to strengthen their power by taking to the streets, organizing actions in front of TUI stores and organizing marches. All of this helped the group build momentum for its centrally coordinated national day of action on August 28, 2021, which it hoped would raise awareness of the campaign and its goals.

TUI has been responsible for at least 21 deportation flights since January 2021. Enough is enough. Join the national day of action against the UK’s first airline deportation on August 28 – Find your local TUI action below ⤵️ 🚫🚫✈️✈️✈️🚫🚫 #TUIDropDeportations pic.twitter.com/zknk398Bx5

“Truly success [of the campaign] depended on the power of the people,” says Zita Holbourne, StopTUI activist, national president and co-founder of BARAC. It was about “many groups and everyday people coming together and responding to our calls to action both online and physically, on the streets.”

This widespread action has made the campaign “very difficult for TUI to ignore”, adds Nik, a member of SOAS Detainee Support and the StopTUI campaign.

“We have been really, really surprised at how the campaign has proliferated across the UK,” they continue. Around 13 local StopTUI groups were formed in response to the initial online campaign, with protests held in Glasgow, Manchester, Brighton and London. This growth has happened “really organically,” says Nik, “because it’s obviously something people really care about.”

We marched through Brighton to demand that @TUIUK stop staging brutal eviction flights.

These thefts tear families apart, send people to countries they have no memory of, and put lives at risk.

Beyond some basic coordination around resources and messages, each group operated independently, joining with local organizations and individuals to design their specific strategies. According to StopTUI activists, this has been a real strength of the campaign. “That self-organizing environment, I think, really empowered people…to take control of their organization,” says Nik, “which […] gave us the impetus to take the campaign to the extreme.

Another important strategy for the campaign was the way it “named[d] and the shame[d] TUI as hard as possible,” says Holbourne. Its main message was loud, clear and focused: “no excessive victimization […] migrants, no white savior complex, no good migrant/bad migrant discourse,” says Nik.

Activists have consistently worked to communicate the violence of the evictions, and TUI’s complicity in them, in relevant and accessible terms. While explaining the abolition of borders can be difficult, says Jackson, “If you stand next to a TUI store and literally point your finger and say ‘you know it’s them. [deporting people]?’, then it’s really shocking and people are jumping on board.

We are out here @TUIUK at Stratford Westfield to demand that they stop carrying out evictions in collusion with the Home Office. No borders! No nations! Stop deportations! pic.twitter.com/xgrHsJRKNv

Targeting the TUI brand has proven to be very effective, says Jackson, because “[private companies are] very likely to have their public image damaged”. As part of these attempts to damage the reputation of the airline, activists have reversed its famous smiley face logo with a frown. They also encouraged people to boycott the airline.

While the campaign may not have had a direct impact on company profits, campaigners soon realized the airline was concerned about the poor public relations it was receiving. Reviewing publicly available minutes of internal TUI meetings, activists learned that “investors were raising the negative public relations of the evictions as a massive risk factor” to the airline’s profitability, Jackson says.

By damaging the airline’s brand, activists were also able to shine a light on the company’s “greed and hypocrisies”, says Nik. They wanted to draw attention to the fact that while TUI organized evictions – many of which took people away from their families – it was “the market[ing] promote itself as a family-friendly organization and extract[ing] enormous financial wealth that results from it”.

Exposing this “heartbreaking duality”, Jackson says, allowed activists to quickly convince people of the inhumanity of TUI’s actions. Apart from “some kind of really nasty reactionaries,” he says, “people don’t support the deportation regime…after they know about it.”

Focusing on human stories rather than abstractions has been effective, says Nik, who says they are what “connect people the most”. The campaign circulated testimonies of people harmed by the hostile environment online and read them out at protests across the UK.

The power of the right-wing media “to distract and alter the truth” about immigration policy was evident throughout the campaign, Nik continues. However, with activists working hard to counter this rhetoric, once people learned about the violent, racist and often illegal reality of evictions, they or they”[didn’t] want to defend it,” they explain.

“The campaign will evolve and transform.”

While TUI has yet to issue a statement regarding the severing of ties with the Home Office – a move which Jackson said “stinks [the airline] trying to hide from responsibility” – campaigners are cautiously optimistic that the company will refrain from working with the government.

And galvanized by their victory, the activists are already receiving ready to move on to new targets. “The StopTUI campaign will evolve and transform because the hostile environment still exists, the deportations still exist,” says Nik.

In leading this fight, Holbourne says attacking the private contractors the government relies on, rather than the government itself, will prove to be a vital tactic. “Although the Hostile Environment and the Home Office operate a complex and powerful web of machinery that maintains this absolutely violent and discriminatory policy on freedom of movement,” he says, “there are weak points.” Private companies are among these vulnerability because they prioritize their profits and are therefore “really susceptible to pressure points that the Home Office doesn’t have to worry about” – a fact that TUI’s concerns about its profitability have highlighted. evidence.

“We identified a loose brick in the wall that is the hostile environment and started tapping on it,” Jackson explains. Other activists, he argues, can do the same: “You don’t need resources, you don’t need huge amounts of power: you need a clear message, and you need to speak to the people of this message.

Sophie K Rosa is a reporter for Novara Media. His book, tentatively titled Radical Intimacy, will be published by Pluto in 2023.