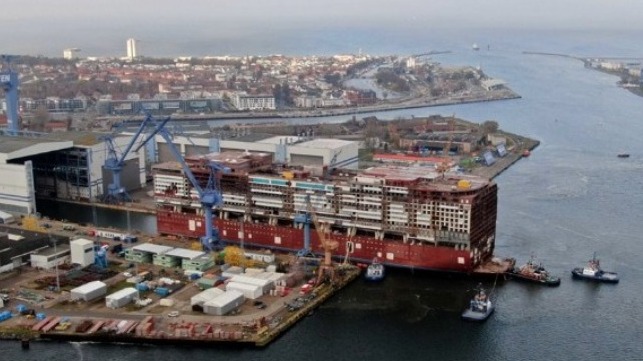 
The German Federal Government has approved a new round of funding to support the financially struggling MV Werften shipyard with operations in Wismar, Warnemunde and Stralsund, Germany. The shipyard had been on the verge of bankruptcy since suspending operations 14 months ago during the pandemic and had contributed to the financial difficulties of its parent company Genting Hong Kong. The shipyard had received a series of bridging loans from last fall to continue limited operations.

After months of negotiations between the German federal and regional government, shipyard unions MV Werften, and Genting Hong Kong, the Economic Stabilization Fund set up by the federal government to help recovery from the pandemic has agreed to provide additional financial support for the shipyard. New economic support will serve as post-construction funding for the exploration cruise ship Crystal Agreement this work is nearing completion as well as to finance the construction of Genting’s first Global Dream cruise ship and for general corporate needs.

“This is an important decision which gives confidence to employees in the region and the country as a whole,” Federal Minister of Economy Peter Altmaier told German media NDR. “Shipyards now have the opportunity to successfully emerge from the crisis linked to the pandemic. “

The new financing will be carried out in two installments. The shipyard will receive $ 261 million in a new subordinated secured loan facility and Germany will invest an additional $ 85 million in the form of a limited-recourse equity investment. As part of the rescue plan, the unions also accepted a reduction of about 20% of the workforce, or 650 jobs out of 3,000 before the suspension of site operations in 2020.

“We are satisfied with the result and would like to express our sincere gratitude to the federal and regional government ministries, the KfW investment and development bank and other banks for their commitment, as well as for the tough but fair negotiations during over the past few months, ”said Carsten J. Haake, Managing Director of MV Werften.

The management of MV Werften also expressed renewed confidence, indicating signs of recovery in Germany and in the cruise industry. They highlighted the reduced restrictions as COVID-19 vaccinations became more available, which they said “allowed supply chains to return to just-in-time mode,” the yard used before the pandemic.

The bridging funding provided in 2020 was mainly used for the completion of the expedition cruise ship which will enter service this summer more than a year behind schedule for Genting’s luxury cruise brand Crystal Cruises. The 20,200 gross tonne vessel completed its final sea trials in the last week of May and is expected to enter service on July 17.

The Global Dream is a 208,000 gross tonne cruise ship under construction for Genting’s Asian cruise line Dream Cruises. It has been under construction at the shipyard since 2018. Limited work has been done on the ship over the past year, but the new funding is designed to support the completion of the ship. Delivery to the cruise ship is now scheduled for 2022.

MV Werften was established by Genting in 2016 through the acquisition of a series of shipyards in Germany. The shipyard was established to build ocean and river cruise ships for Genting brands and planned to market the entire cruise industry. With the new financing in place, the yard hopes to once again attract new orders, including a sister ship to the Crystal Agreement. The shipyard had started work on the second Global Dream cruise ship, but it will remain suspended for the time being pending additional funding.

Genting Hong Kong has undergone its own financial restructuring brought on by the impact of the pandemic in the cruise and hospitality sectors. Closing the financing deal with Germany was a key part of Genting’s program, although the company must also raise additional capital before the end of the year to support its cruise and casino business.

In addition to funding for the shipyard, the German fund has also provided support to other companies in the travel and hospitality industry, including German airline Lufthansa and tour operator TUI.

Two stocks are worth seeing as European tourism rebounds

New blow for summer travel as Germany puts Portugal on the red list, even for fully…