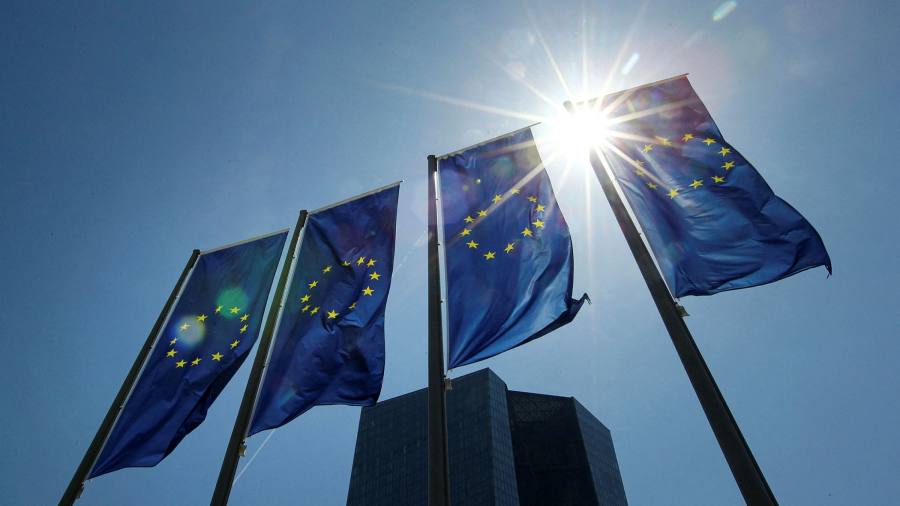 Hello. This article is an on-site version of our FirstFT newsletter. Sign up for our Asia, Europe/Africa or Americas edition to get it delivered straight to your inbox every weekday morning

The eurozone is well placed to ride out market volatility and its economy will grow this year and next, the eurogroup chairman said, denying that the monetary union faces a crisis similar to that of a few years ago. ten years old.

Paschal Donohoe, Ireland’s finance minister and head of the pan-eurozone group of finance ministers, said the circumstances were “completely different from the type of crisis environment” when the bloc was gripped by a spiraling sell-off of the sovereign debt in the early 2010s.

Since its last debt crisis, the EU has strengthened banking regulation with a pan-European supervisor and crisis-fighting infrastructure in the event of lender default. The European Central Bank also has tools to buy government bonds, and lawmakers have created a recovery fund backed by common debt.

Donohoe said the eurozone now has “a stronger architecture” and “a deeper foundation for our common currency.”

Do you agree with Donohoe? Share your thoughts with [email protected] and we may publish your response in a future newsletter. Thank you for reading FirstFT Europe/Africa. Here’s the rest of the day’s news — Jennifer

Five other stories in the news

1. Emmanuel Macron loses the majority in the French Assembly Early results showed Macron’s centrist Ensemble alliance falling well short of an outright majority after a strong performance in yesterday’s legislative elections by a left-green opposition alliance and a push from the far right.

Learn more about the war in Ukraine

3. CMA chief: UK risks being a ‘rule taker’ on tech regulation Andrea Coscelli said companies were investing to adapt to Brussels’ tech laws, which could make it harder for the UK to diverge due to the ‘excessive cost’ for businesses after the government chose not to empower the competition regulator to establish codes of conduct for the major Internet groups.

4. City bosses warn of UK recession this year The FT’s City Network, a forum of more than 50 senior executives, said policymakers faced tough decisions to mitigate the worst effects of a downturn and raised concerns that managers lacked the experience to cope to severe economic shocks.

5. Crypto Industry Faces Fallout After Weekend Crash Crypto investors and executives braced for further pain after bitcoin fell to $17,628 on Saturday before rebounding as a growing credit crunch in the digital asset industry threatens to engulf good many of its greatest actors.

Belgium returns the remains of Patrice Lumumba Belgium will return the remains of the first Prime Minister of the Democratic Republic of Congo, assassinated in 1961, during an official ceremony today in Brussels.

World Gatherings Commonwealth heads of government are gathering in Rwanda for a biennial meeting which has been twice delayed by the pandemic. The EU Foreign Affairs Council meets in Luxembourg to discuss relations with Egypt, the Horn of Africa and the war in Ukraine. The executive council of the World Meteorological Organization meets in Geneva.

What else we read

The deafening silence on the economic fallout from Brexit As the sixth anniversary of Britain’s vote to leave the EU approaches, economists are beginning to quantify the damage caused by Britain’s creation of trade barriers with its biggest market, separating the ‘Brexit effect’ damage caused by Covid-19. Their conclusion? The damage is not over yet.

Central banks and markets share a secular awakening As rhetoric about fighting inflation gave way to meaningful policy action, first there was a realization that we were moving into tougher financial terms – then a second that there would be no hiding place for policy makers, households, businesses and markets, writes Mohamed El-Erian.

Citi’s $900 million error complicates Revlon’s bankruptcy As the US cosmetics group negotiates its restructuring after filing for bankruptcy last week, it still does not know the identity of its main creditors, the result of a bizarre mistake in which Citigroup mistakenly used its own money to repay a term loan that he administered on behalf of Revlon. Here is what happened.

Can a boss be funny? Emma Jacobs wonders if climbing the ladder requires power-hungry people to take themselves so seriously that they munch on their funny bone. But there are two leaders who have made progress in part because of their comedic talents: Boris Johnson and Volodymyr Zelenskyy.

How to Escape the Great Innovation Stagnation With soaring inflation and declining research productivity, ideas have become more expensive to find. Spending more on R&D will not solve the productivity problem. The answer may lie in accelerating remote collaboration.

Thanks for reading and don’t forget you can add FirstFT to myFT. You can also choose to receive a FirstFT push notification every morning on the app. Send your recommendations and comments to [email protected] Register here.