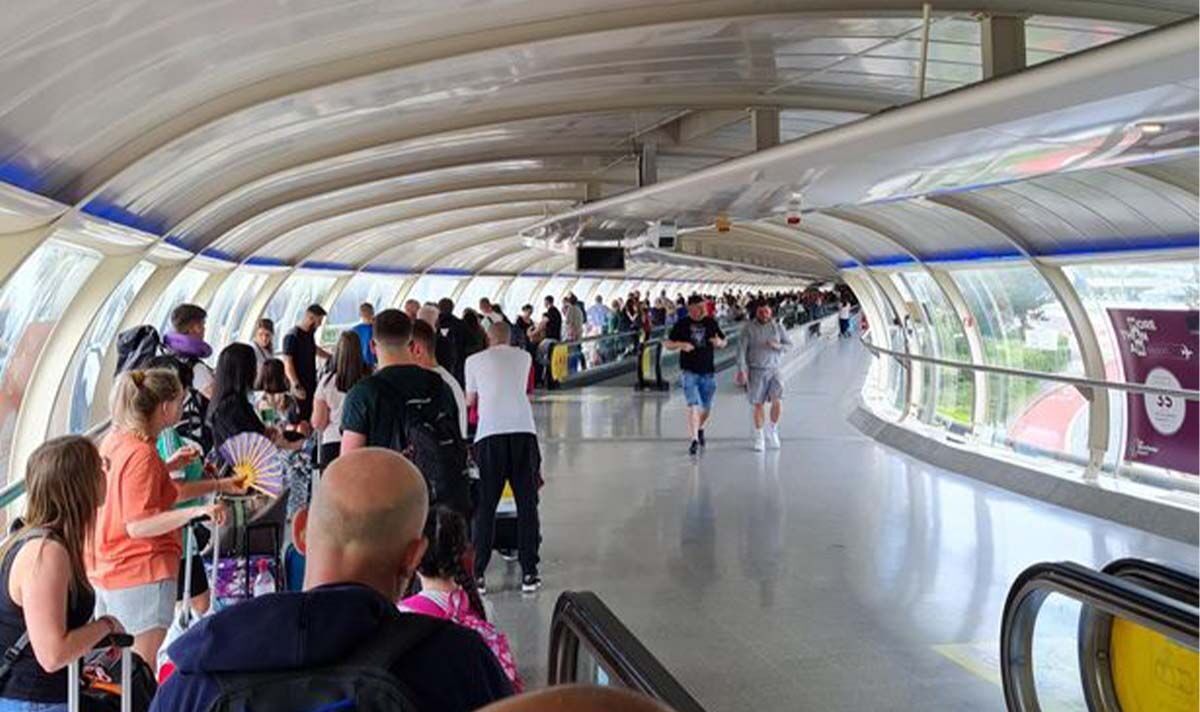 Holidaymakers looking to get away for May’s midterm said they faced a grueling four-hour wait to clear check-in and security, followed by a four-hour flight delay “waiting for a pilot”. The troubled flight to Kos, departing Manchester Airport’s Terminal 2, was due to take off at 3.45pm on Saturday, but angry ticket holders say they would have missed the flight – had it been there ‘time – due to queues outside the building’ for check-in. After suffering another four-hour delay, a family said they were told by text message from TUI that their trip, including flights and an all-inclusive hotel, had been cancelled.

Helen, from Sale, was traveling to Kos with her husband and teenage daughter. They were appalled by the treatment, they say.

“It’s absolute chaos,” she told MEN. “There were hardly any staff here. Everyone got a text from TUI saying their holidays had been canceled and they had to go home. The receptionists didn’t know anything, we found out before. And they had to deal with hundreds of complaining passengers, the equivalent of a full flight.

“The police had to come in and make an announcement, a holidaymaker was arrested and handcuffed. We had to go through security again, show our passports, even though we had never left the airport. I wouldn’t expect this from Manchester airport and definitely not from TUI.It’s just disgusting.

“All the passengers are really angry, there are children crying. We took a week off, my daughter is not at school – she was looking forward to this vacation, bought new clothes and everything We were expecting it to be bad at Manchester Airport but everyone is in shock at how bad it is Police had to unload people’s suitcases because it wasn’t there were no staff to do so.

George Sharp said his daughter had traveled from Bradford for their holiday to Kos – on the same flight as Helen – and had been queuing for 12 hours. They were at the gate ready to board when they received a text from TUI saying their £4,500 trip had been cancelled.

“It was like circumstances I had never heard of before,” George said. “They went on board and then they canceled not just the flight but the whole holiday. TUI staff refused to deal with anyone and the police arrived to tell them to go back through security to collect their luggage and return home.

“She just got married two years ago so all they know is Covid since they got married in March 2020 and it was supposed to be a big reset for them and help them get back to normality. They were on a contract five-year-old little girl and it’s just awful, they were just heartbroken and confused.

“It’s hard to console her, because what can you say? They had just gotten their passports two days ago, so they were stressed about it. It’s just one thing after another Being at the airport for eight hours, dealing with numerous delays and getting ready to board only to be told it’s over is really upsetting for all of them.There was no communication other than a SMS.

Jayesh Patel, from Manchester, was due to travel on the same flight to Kos with his wife and their three children, aged 9, 12 and 13. “We arrived at the airport three hours before our flight, as advised, and the baggage queue at T2 was all the way up the airbridge to terminal one,” Jayesh said.

“We got through security pretty quickly, but we only had about 20 minutes left before our flight departed. The first time we found out that our flight had been delayed for another three hours was when we got arrived at the departure lounge – no one told us that our flight was going to be delayed.

“Around 6pm they gave us £5 vouchers to buy food but we still have them as the shops were all very busy or had just started to close. At 7.48pm we received a text message saying that all our vacation had taken place, there was no one to talk to at the airport, but there was a lot of upset and frustration as we all got the text message at the same time.

“We all had to go through passport control again, which was ironic as we hadn’t been anywhere, and back to arrivals to wait for our luggage which was already on the plane. Because the plane had arrived out of nowhere, our flight wasn’t listed on any of the baggage carousels, so we didn’t know where to wait – people were visibly upset and children were crying. We then had to wait another few hours and by this point we had spent the whole day at the airport and just wanted to leave.”

Jayesh said all passengers have been offered a full refund on their flights, £350 compensation and a £200 holiday voucher, but he says he would prefer the voucher to be in cash. “Actually, I’m not sure we wanted to book another holiday with TUI at this stage,” he explained.

“We’ve traveled with TUI in the past – before the pandemic – but I don’t have any faith in them at this stage. I also don’t see those issues being resolved in the short term, so I think I would just prefer to have the cash, instead of a voucher, so we can book elsewhere.”

Speaking about what he and his family are now planning to do with their week off, he said they will just hang out together as it looks like they won’t be able to book somewhere at the last minute. He added: “We thought we were going to wake up this morning going out to have a Greek breakfast somewhere near the beach, but it wasn’t supposed to be.”

A TUI spokesperson said: “We would like to apologize for the inconvenience caused to our customers on flight TOM2680 from Manchester and Kos on Saturday May 28 who were delayed due to a combination of factors causing significant operational disruptions.

“Unfortunately we felt the impact on customers’ holidays was too great and have made the difficult decision to cancel the flight. We contacted affected customers as soon as we became aware of the change and all customers will receive a full refund within 14 days. We understand how disappointing and frustrating this is and apologize for any inconvenience caused.”

TUI: Warning from the widow after the death of her husband during a dream holiday