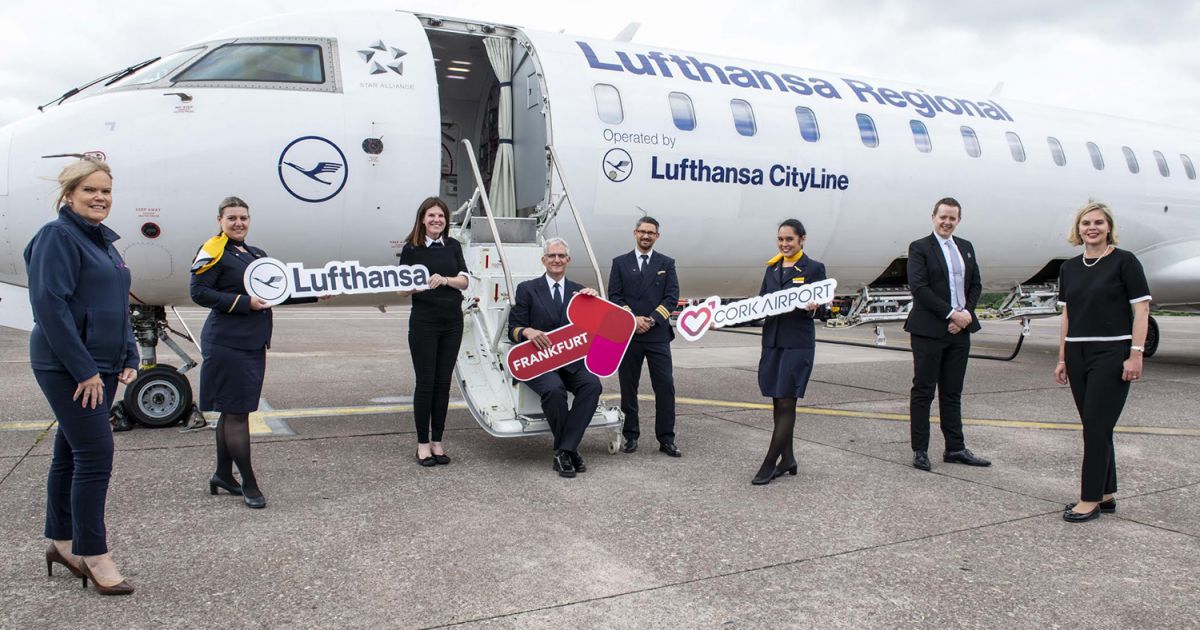 
Lufthansa has launched a new bi-weekly service from Cork Airport to Frankfurt.

The new service, operated by Lufthansa’s CityLine line, will operate on Mondays and Fridays. The route will be served by a Bombardier CRJ-900 aircraft with 75 seats on board – 15 in business class and 60 in economy class.

The flight will depart from Frankfurt Airport at 3:40 p.m. local time and arrive at Cork Airport at 4:45 p.m. The return flight will depart Cork at 5:25 pm and land in Frankfurt at 8:30 pm local time, a flight time of two hours and five minutes. Lufthansa joins other major European airlines – KLM, SWISS and Air France as well as national airlines Aer Lingus and Ryanair, operating from Cork Airport this summer.

Based in Frankfurt, Lufthansa is one of the largest airlines in Europe and also owns SWISS, Austrian Airlines, Brussels Airlines and Eurowings. The carrier operates an extensive network of regional services in Germany and Europe as well as Asia Pacific, Middle East, North America, South America and Africa through major hubs at Frankfurt and Munich airports . Lufthansa operates a large fleet of narrow and wide body aircraft, as well as regional jets. A listed company, Lufthansa is a founding member of Star Alliance.

Yesterday’s announcement concludes intensive efforts by the Cork Airport team to bring the German national carrier to Cork in recent years. This new Lufthansa operation will complement the existing service of SWISS International Airlines, with the two airlines offering seamless connectivity through their Lufthansa Group hubs in Frankfurt and Zurich respectively.

“It’s a tough time for aviation around the world, so it’s great to see Lufthansa take off from Cork Airport this summer as they fly from Cork to Frankfurt for the first time in eighteen years. We have worked hard for many years to secure connectivity to Frankfurt and beyond with Lufthansa to help businesses and international trade companies in the region of southern Ireland. It’s great to see all of this work come to fruition and ensure additional international connectivity to another major European hub airport. ”

Speaking on the launch of the new Cork-Frankfurt service for 2021, Andreas Koester, Senior Director of UK, Ireland and Iceland Sales for Lufthansa Group, said:

“After 18 years, we are proud to see Lufthansa operating at Cork Airport again. Just in time for summer, this new Cork-Frankfurt route complements our flights from Cork to Zurich with SWISS, underlining the importance of Ireland within our network. Additionally, with this additional connection, we look forward to offering our customers even more travel options within our global multi-hub system. As one of Europe’s largest carriers, with a short stopover in Frankfurt, our customers will have access to hundreds of connections to many destinations within our extensive global network. ‘