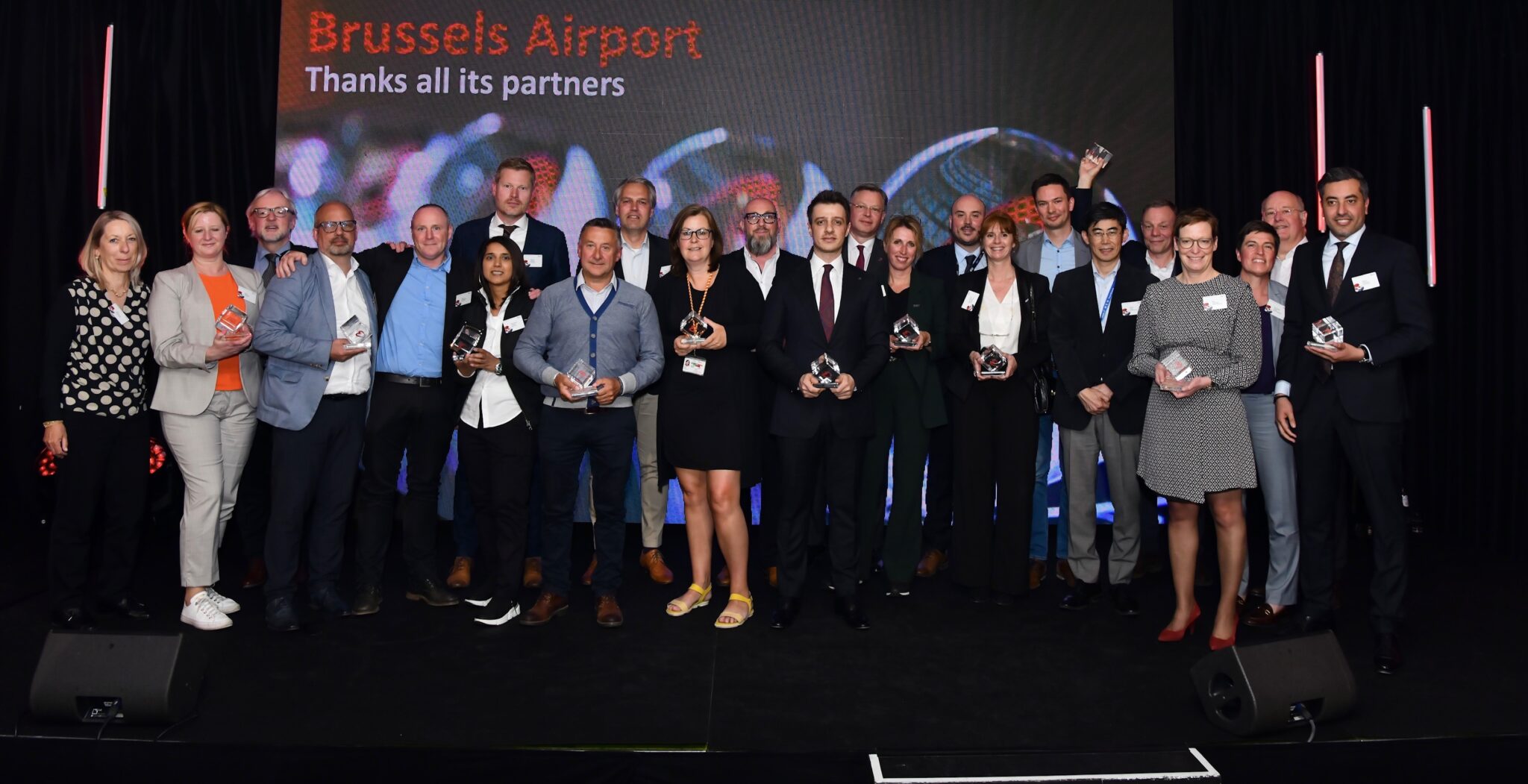 Brussels Airport Company continues its annual tradition of presenting the Brussels Airport Aviation Awards. With these awards, Brussels Airport wishes to honor the airlines and partners who, in 2021, have excelled in the areas of punctuality and performance, network development, safety and the environment. 12 prizes were awarded at a live partner event.

Since October 2007, Brussels Airport has organized the Aviation Awards to reward airlines and their partners for their exceptional performance. In 2021, there was an adapted edition with only Cargo Awards because in 2020 passenger airlines and their partners were strongly affected by the Covid crisis. Once again this year, a full edition of the Aviation Awards with winners in 12 different categories took place at the Brussels Airport Sheraton Hotel on April 27.

The Performance and Punctuality Awards are given to passenger and cargo airlines that excel in punctuality and performance. Punctuality is the best punctuality, that is to say with an arrival or departure less than 15 minutes from the scheduled time. Cargo performance is calculated using the number of weekly flights, number of destinations, total amount of cargo carried, cargo per flight and cargo tonnage growth.

The airline that contributed the most to Brucargo’s development last year was Qatar Airways Cargo, for the third consecutive year. They currently operate 11 scheduled flights per week between Brussels and Doha. The other nominees were Ethiopian Airlines Cargo, Sichuan Airlines and Singapore Airlines Cargo.

The Punctuality Awards are given to the airlines with the best performance in terms of punctuality. For the Punctuality Award, Brussels Airport has selected the last six months of the past year, which better reflect the recovery in traffic. In 2021, Aer Lingus was the most punctual airline with an punctuality of 93.5% for airport departures. Aer Lingus performed slightly better than the other airlines nominated in this category: Air Europa, Eurowings, airBaltic and Croatia Airlines.

The on-time performance award for long-haul airlines goes to Emirates. Last year, the airline achieved an punctuality of 88.6%. The other nominees in this category were ANA, Qatar Airways, Etihad and Ethiopian.

There are two awards dedicated to freight players and partners in the Brussels Airport area for innovation, growth and partnership.

The Brucargo Award was created in 2012 to honor the partners of Brussels Airport in the Brucargo region. This year, the prize goes to dnata. The handling company has proven to be a stable and trusted handling partner for Qatar Airways and a leading contributor to innovation projects within the Brucargo community. In the last year, he obtained two IATA CEIV certifications, for pharmaceuticals and live animals. The other nominees in this category were ACIC Operator, Aviapartner Cargo, Customs Brucargo, Flanders Investment & Trade and Swissport Cargo.

In 2021, DSV showed growth and a strong commitment to perishable goods and live animal transport, alongside general freight. They introduced additional charter flights and contributed to the development of the transport of pharmaceutical and perishable products at Brussels Airport. DHL Global Forwarding, Hongyuan Group and Ziegler were also nominated in this category.

The Environment and Safety Awards are given to airlines or partners who have made a particular contribution to the environment and to the continuous improvement of safety standards and awareness.

The environmental prize was awarded to DHL Aviation. This company has reduced its CO2 impact through its investments in airside electric transport and is committed to implementing Sustainable Aviation Fuels. It also has a clearly defined sustainability strategy which, in addition to climate, also includes gender equality, diversity and inclusion, as well as strengthening cooperation with all stakeholders, including joining the project. Brussels Airport Stargate.

Gate Gourmet is well known for its excellent responsiveness, collaborative safety attitude, effective communication and action tracking, which is why they are awarded the Safety Award. The other nominees were Skytanking and Mobility Masters.

The Network Development Awards recognize airlines that have launched new routes or achieved significant growth in passenger or cargo volumes.

The Cargo Airline of 2021 award goes to DHL Aviation. They posted strong volume growth in 2021 and introduced additional routes in North America to strengthen their network from Brussels. DHL Aviation has also made a conscious choice to build a sustainable future together by joining the Brussels Airport Stargate project. The other nominees were Ethiopian Airlines, Sichuan Airlines, Singapore Airlines and Qatar Airways.

In 2020, Brussels Airport introduced the Cargo Special Achievement Award for the organization that contributed to the successful development of Brussels Airport as a gateway for the global distribution of Covid-19 vaccines. This year, the prize goes to All Nippon Airways, which successfully relaunched its operations at Brussels Airport with passenger cargo ships and played a key role in the export of vaccines to Japan. ANA has a very dedicated local team that impeccably prepared the first flight of vaccines to Tokyo. The other nominees were DHL Express, Pfizer, Pharma.aero and United Airlines.

A double in this category with a prize for Royal Air Maroc and Turkish Airlines. Royal Air Maroc operated a high-density flight schedule to serve the Belgian Moroccan community, despite the impact of two consecutive Moroccan government travel bans. Turkish Airlines has operated a busy flight schedule to serve the Belgian Turkish community, also introducing new flights to Antalya and this year Ankara.

Reconnecting friends and families was more important than ever after lockdowns and travel bans. The other nominees were Nouvelair, SKY Express and SunExpress.

Brussels Airlines is the winner for its successful takeover of the African network during the Covid crisis and for being a key part of the Lufthansa Group network. The other nominees in this category were Air Belgium, Ethiopian, TUI fly and United Airlines.

This year we are also awarding a Diamond Award. The Diamond Award is not awarded every year, but when it is, it recognizes an organization or individual who consistently contributes to the successful development of Brussels Airport. This year, the Diamond Award goes to Niky Terzakis, CEO of Air Belgium. He had the ambition to create a new airline that would connect Belgium to the five continents of the world, initially for passengers, but in its evolution also for freight. Air Belgium managed to overcome many obstacles during its start-up and also successfully survived the recent Covid crisis. The airline is also recognized for its quality service, reliability, efficiency, team spirit and investment in a modern and sustainable fleet.

Brussels Airport congratulates all winners and nominees for their efforts and contribution, especially in this year of recovery from the Covid crisis.