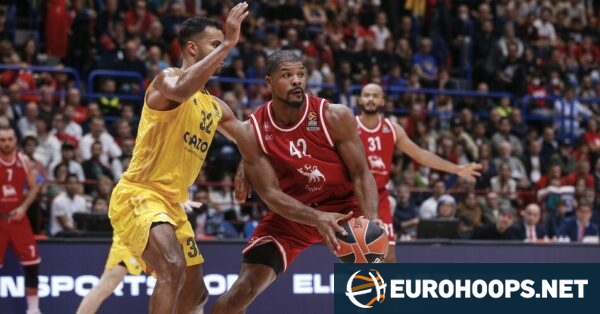 In February 2020, ALBA Berlin scored its first-ever victory at the Mediolanum Forum.

In the second round of the 2022-23 EuroLeague, after a tough game that ended in extra time, they secured second place by beating Ettore Messina’s side 74-80.

Tamir Blatt was the hero of the game, closing with 13 points, 5 rebounds and 9 assists. Jaleen Smith struggled from deep (2/10 3PTS) but still recorded 13 points, while EuroLeague rookie Yanni Wetzell added 10.

“Congratulations to our team for the faith. Just at the last minute, Milan equalized the game and we were able to keep fighting, still believing in ourselves. The most important thing is how we played as a team, we showed the chemistry today that we have,” said coach Israel Gonzalez after the victory, adding about his players.

Kevin Pangos had a tough night in the first three quarters but stepped up in the fourth, finishing the game with 16 points. After missing Round 1 against ASVEL, Shavon Shields made his 2022-23 EuroLeague debut with a fine performance of 15 points, 6 rebounds and 4 assists. Kyle Hines added 10 points.

“We lost the match because we had a lot of misunderstandings defensively, that’s my responsibility. Offensively, we created a lot of good shots but we couldn’t shoot well: that’s part of the game. We played a better second half with more aggression. I have to find a way to make the team play better.”said coach Ettore Messina during the press conference.

Still, Ettore Messina didn’t have his full list available as Nazareth Mitrou-Long, Luigi Datome and Tommaso Baldasso were all absent. Davide Alviti has been dismissed.

Israel Gonzalez was without Marcus Eriksson, out indefinitely with a leg injury, Malte Delow and Ben Lammers, and Maodo Lo rested.

Even without the German playmaker, who has been the leader of this team lately, ALBA Berlin put on a show in the first half, producing an attacking clinic and closing the second quarter leading 30-38. .

In the second half, Milan increased defensive intensity and closed the gap, leveling things at 70-70 with thirty seconds left in the fourth quarter, sending the game into extra time.

In the extra five minutes, Ettore Messina’s side scored just four points, while the guests prevailed.

Both teams had a tough three-point night: Milan shot 9/31 from the arc and ALBA Berlin 9/34.

EA7 Emporio Armani Milan will now travel to Belgrade to face Partizan on October 18 at 20:45 CET, while ALBA Berlin will host Panathinaikos the following day at 20:00 CET.