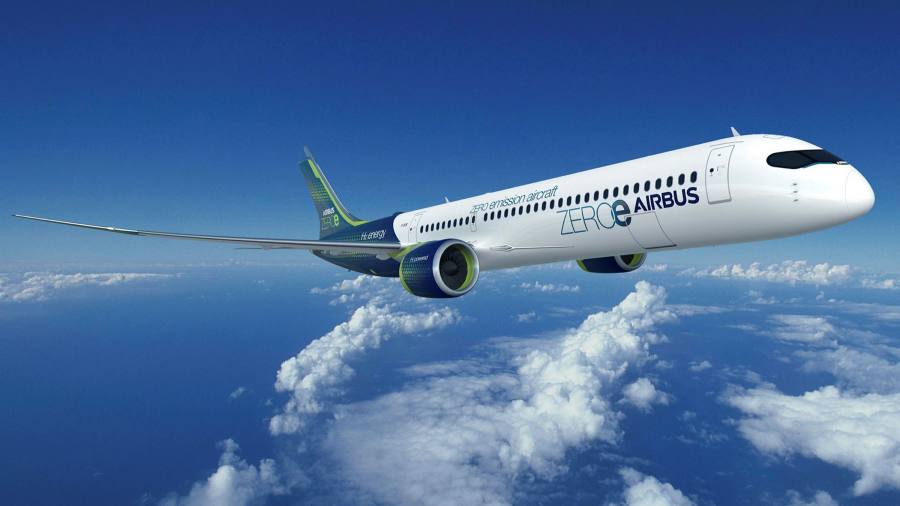 The moment of hydrogen is fast approaching, according to Airbus. Considered the fuel of the future for years, Guillaume Faury, managing director of the aircraft manufacturer, says the company is ready to start building a commercial hydrogen airliner before the end of the decade.

The European aerospace champion is increasingly convinced that 2035 is a “fair and realistic prospect” for the entry into service of a hydrogen aircraft, despite the skepticism of other industry leaders about the speed with which gas can impact aviation emissions.

“We don’t need to change the laws of physics to go with hydrogen. Hydrogen has an energy density three times that of kerosene – [technically it] is made for aviation, ”Faury told reporters at an Airbus sustainability event in Toulouse.

Faury’s comments are a testament to Airbus’ growing confidence in its ability to meet the complex engineering and safety challenges required to operate hydrogen aircraft. Faury warned, however, that government and regulatory support would be needed.

Airbus, Faury said, needed to have a “degree of certainty” about the regulatory environment and fuel availability by 2027/28, when the company will have to decide whether or not to invest billions. in a new hydrogen aircraft program.

“This [decarbonisation] The challenge isn’t just about an aircraft, it’s about having the right fuels – hydrogen – at the right time, in the right place, at the right price and it’s not something aviation can handle on its own. “, did he declare.

Faury’s remarks underscore the growing urgency of the aviation industry as it strives to meet zero-emission targets by 2050. Before the pandemic brings much of the industry to a standstill. the global aircraft fleet, aviation accounted for about 2.4% of global emissions.

The pressure to reduce emissions has only accelerated since the crisis. The Toulouse summit brought together airlines, airports and policy makers to galvanize a cooperative approach on how to burn less kerosene.

Aerospace companies are working on a number of different technologies, from “sustainable aviation fuels” to electric batteries and hydrogen. Rolls-Royce, the British aeronautical engineer, is currently testing an all-electric aircraft. Many are also supporting new start-ups that promise a revolution in urban air mobility through the use of air taxis.

Airbus, along with its peers, agrees that there are no “quick fixes” and that a variety of solutions will be needed to meet the challenge of decarbonization. He is also working on different technologies, including sustainable aviation fuels.

But differences remain over how quickly the industry can produce hydrogen, and Airbus’ enthusiasm is not shared by everyone.

“At Airbus, we have decided to take the bull by the horns,” said Faury. “We have seen engine manufacturers dramatically change their perspective on hydrogen, which is very positive.

Engineers at the European aircraft manufacturer are working on several different zero-emission concepts, all of which rely on hydrogen as the primary energy source.

The number of technical challenges is great. Sabine Klauke, Airbus technical director, said the need to liquefy hydrogen and store it at minus 253 degrees centigrade was an obvious hurdle. The special double-walled tanks needed to hold the substance are four times the size of conventional fuel storage and should be housed in the body of the aircraft.

Even if technological obstacles can be overcome, the investments required to develop the supply of “green” hydrogen from renewable energies, to modify the storage needs at airports and associated infrastructure, will be enormous. Following the pandemic, European governments, in particular France and Germany, have committed large sums to help the industry to decarbonize, in particular through the use of hydrogen.

Airbus says it is likely to produce a regional or shorter range aircraft first.

Critics point out that the massive drop in the industry’s carbon footprint will only come from tackling the most polluting segment of aviation – 73% of carbon dioxide emissions come from medium and long-haul flights , according to the Air Transport Action Group.

Alan Epstein, a former industry executive and professor of aeronautics at MIT, says sustainable aviation fuels are the only “practical solution” to making commercial aviation greener.

“Not only do you want to reduce CO2, you want to get closer to eliminating it by 2050. Time is running out and solutions that require replacing billions of dollars in airplanes and airport infrastructure with technology that will not be not mature for a decade. or two won’t get you there, ”he said.

“The economic feasibility of hydrogen airliners over the next 20 years is more strongly influenced by national policy and regulation than by technical or financial reality. It is these regulations that will establish any economic basis, ”added Epstein.

David Joffe of the UK’s Climate Change Committee, the government’s advisory body, is also skeptical of hydrogen as a solution.

“We need solutions sooner than that,” he said, stressing that planes bought today “will still work in 2050”.

Despite the current high cost of sustainable aviation fuels compared to conventional kerosene, the committee estimates that in the longer term, once these fuels are deployed on a large scale, they would add around £ 80 to the cost of a round trip ticket. from London to New York.

At Airbus rival Boeing, engineers are also working on technologies such as hydrogen and electric propulsion, but the company has made it clear that it believes the potential of gas is declining.

“My path will not include – by 2050, will not include the introduction of a hydrogen airplane into the scale of the planes we are talking about,” Boeing chief executive Dave Calhoun said during ‘an analysts conference in June.

Instead, he cited fleet renewal, as airlines move to more efficient planes, and sustainable aviation fuel as critical steps in the immediate future.

“The technologies work, we know it,” he said of sustainable fuels. “The question is cost and scale.”

As the industry emerges from the crisis caused by the pandemic and airline management begins to rethink growth, the only thing that is clear is that the industry needs to change.

“Our passengers expect change. If you don’t do the right thing, you risk not having a business, ”said David Morgan, director of flight operations at easyJet.